The ability to think and feel is what makes us humans differ from other species on earth. This is also what Cecilia Damström (b.1988) tries to achieve with her compositions; to make people think and feel. Born into a multicultural family in Helsinki, languages and the possibility of combining languages, have always appealed to her while composing. With a background as a classical pianist and with theatre as an interest, also harmony, direction, a sense of drama, and expressivity are always present in her music.

Since graduating in 2014 she has constantly been working on commissions for various ensembles and festivals. Her compositions have received several national and international composition prizes 2009-2018. Her fairytale opera Dumma Kungen won the award “Children opera of the year” in 2018. In 2019 she made her debut with the Finnish National Opera with her opera Djurens planet. Her works for orchestra have been performed by Jyväskylä Sinfonia (2016 & 2018), Gävle Symphony Orchestra (2018), Helsingborg Symphony Orchestra (2018) and Avanti! (2011) as well as at festivals such as Young Nordic Music Days in Aarhus (2016) and Tampering (2014, 2015 and 2017). Since 2019 she is signed with one of the biggest music publishers in the Nordic countries, Gehrmans musikförlag.

Damström’s broad catalogue of compositions includes chamber music, choral works, orchestral works as well as two chamber operas. Her music has been performed in Canada, Germany, England, The Netherlands, Spain, Sweden, Denmark, Norway, Iceland and the Czech Republic. Her music is regularly performed in Finland at different concerts as well as at festivals such as Tampere Biennale (2010, 2012, 2014 and 2020), RUSK Chamber Music Festival (composer in residence 2017), Time of Music (2019), Helsinki Winds (2017), Summer Sounds in Sysmä (2015), Summer Sounds in Porvoo (2011), Tampering Festival (2014, 2015, 2017 and 2019), VocalEspoo (2014 and 2016), Music By the Sea (2019), Kumaus Festival (2019) and also at the Kokonainen Festival, where she is composer in residence (2016-2020). This season’s 2019-2020 highlights include her debut with the world premiere of the 30 minute global warming themed Requiem for our Earth for female choir, electronics and video projection as well as making her debut with both Kuopio City Orchestra and Colorado Springs Philharmonic with her piece Tundo!

Damström studied composition with Doctor Hannu Pohjannoro at Tampere University of Applied Sciences and graduated in 2014. Currently she is finishing her master studies in composition at Malmö Academy of Music for Professor Luca Francesconi. She has also gathered much inspiration by travelling to master classes around Europe. Damström is working full time with commissions for musicians, ensembles and orchestras. The Finnish Cultural Foundation, The Swedish Cultural Foundation in Finland and Alfred Kordelin Foundation have supported her artistic work. 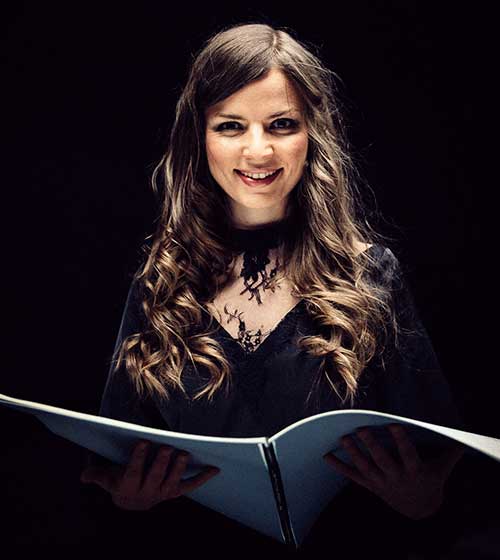