Tenor Jussi Myllys is a versatile singer and his repertoire spans over opera, oratorio and German lied. After finishing his Master’s degree at the Sibelius-Academy he spent a year as an exchange student in Berlin, and was thereafter engaged as soloist by the Frankfurt opera (2006–2009).  He is currently engaged at the Deutsche Oper am Rhein in Düsseldorf. He has performed at the opera houses in Geneva, Napoli, Paris, Bayerische Staatsoper in Munich, Komische Oper in Berlin, Semperoper in Dresden, Helsinki National Opera, and at the festivals in Edinburgh, Kuhmo and Savonlinna. He has performed under the famous conductors Kent Nagano, Daniele Gatti, Esa-Pekka Salonen, Adam Fischer and Zubin Mehta.

As concert soloist he has performed in Europe and in Japan with the RIAS chamber choir in Mozart’s Requiem, in Prague with Peter Schreier in Bach’s St. Johns Passion, and in The Vatican City in Haydn’s Harmoniemesse under Helmuth Rilling. His concert repertoire includes the Evangelist in Bach’s Passions, Britten’s Serenade for Horn and Strings, Haydn’s Creation, Verdi’s Requiem, and Mahler’s Das Lied von der Erde. Together with his longtime pianist partner Manuel Lange the duo has given many recitals with Schubert’s Die schöne Müllerin and Schumann’s Dichterliebe. 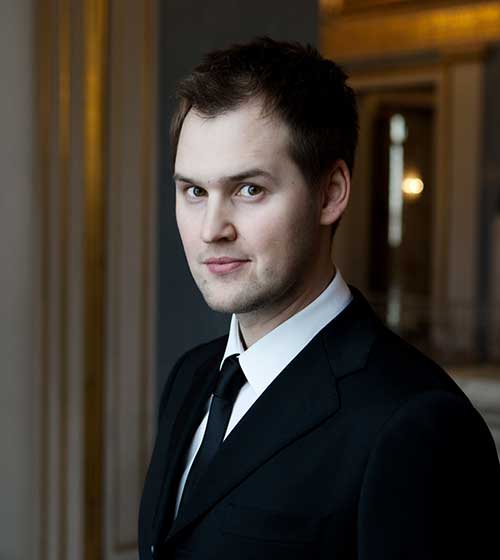