Ismo Eskelinen is acclaimed as one of the world’s finest classical guitarists. He has performed as an orchestra soloist, chamber musician and in collaboration with some of the most distinguished contemporary composers. His impressive list of recordings include two Bach albums, of which the first won the Finnish Emma prize in the category of the best classical album in 2014. The latest recordings are ‘Songbook’ with Jan Vogler (Sony Classical 2019), ’Carnival’ (BIS 2019) with Karen Gomyo and ’Kromos’ (BIS 2020), a solo album that contains music composed for Eskelinen. His repertoire spans music from the 16th century to the present day and he has been equally acclaimed for his performances of Bach as for his premieres of contemporary works by Kalevi Aho,  JukkaTiensuu, Sebastian Fagerlund and Olli Mustonen.

Eskelinen has performed at venues such as the Berlin Philharmonic, Concertgebouw Amsterdam, the Royal Festival Hall and the Théâtre de la Monnaie. He is the first guitarist to be invited as a soloist at the new Music Hall in Helsinki with both resident orchestras, The Helsinki Philharmonic and The Finnish Radio Symphony. Recent engagements include the BBC Symphony Orchestra in London, NWD Philharmonie in Germany, the Finnish Radio Symphony Orchestra, the Tampere Philharmonic Orchestra, Sinfonia Lahti and the Chamber Orchestra of Lapland. He is a regular guest on several festivals such as Naantali and Moritzburg, Dresden, Charlottesville, Mainz, Schaubeck and Büsingen Festivals.

Eskelinen is the Lecturer-in-charge of Guitar at the Sibelius Academy in Helsinki and the Artistic Director of the Riihimäki summer concerts and Sonkajärvi Soi festival in Finland. 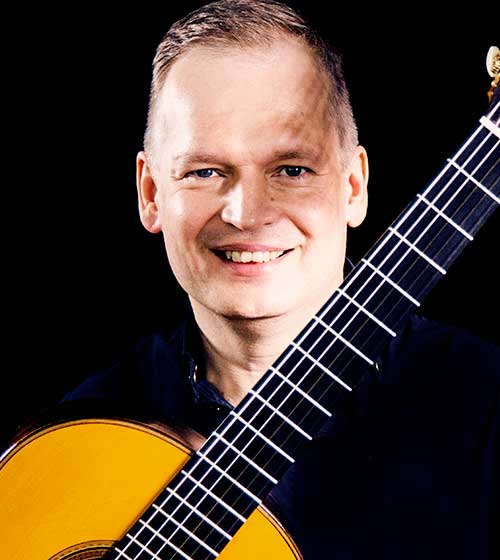