Being a passionate chamber musician Sundqvist is a co-founder of the brass quintet »Arktinen hysteria« and a long-term member of the »Plus Ensemble« based in Turku. He appears at festivals as the Helsinki Festival, Kuhmo Chamber Music Festival, MärzMusik Berlin, Warsaw Autumn and West Cork Chamber Music Festival and collaborates regularly with Pekka Kuusisto, Hugo Ticciati, Thorleif Thedeen, Angela Hewitt, Tommi Aalto, Oliver Triendl, Niek de Groot, Peter Bruns, Herve Joulain and the Trio Cecilia Zilliacus/Johanna Persson/Kati Raitinen. Since 2013 he is Artistic Director of the Jakobstad Sinfonietta and Rusk Chamber Music Festival in Jakobstad.
Sundqvist’s diskography includes recordings of the clarinet concertos by Sebastian Fagerlund (Göteborg Symphony), Aulis Sallinen, Peter Eötvös, Carl Nielsen (Finnish Radio Symphony) for BIS and Alba Records, which have claimed international recognition and were both awarded the EMMA prize. Ondine Records is planning the recording of Erkki-Sven Tüür’s clarinet concerto and the double concerto for violin and clarinet with Pekka Kuusisto and the Finnish Radio Symphony. CPO Records will record the four clarinet concertos by Louis Spohr with the NDR Radiophilharmonie Hannover.

Christoffer Sundqvist is principal clarinetist of the Finnish Radio Symphony Orchestra since 2005. He teaches clarinet at the Sibelius Academy in Helsinki. Christoffer Sundqvist was born in Stockholm, moved to Finland at the age of 6 and began his clarinet studies at the Jakobstad Conservatory with Bernhard Nylund. He completed his diploma examination at the Sibelius Academy with Anna-Maija Korsima and continued his studies at the Basel Music Academy with François Benda. Other important teachers include Hans Rudolf Stalder, Guy Deplus and Charles Neidich and a number of distinguished chamber music musicians. 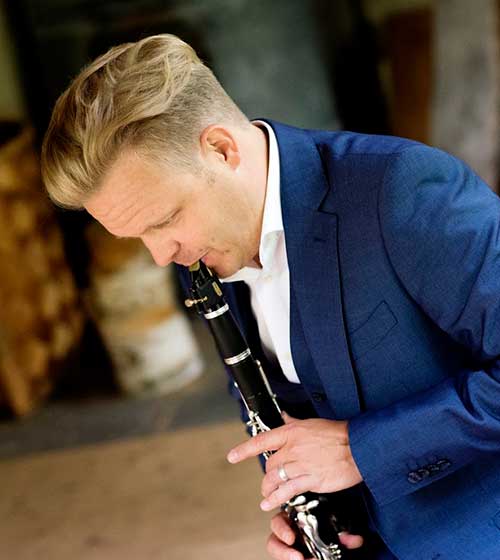